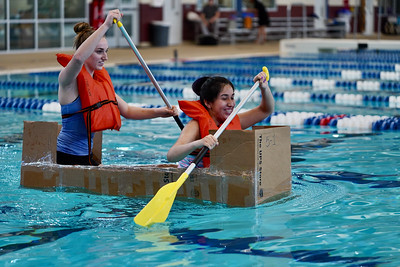 Principles of Technology: a class that teaches physics by delving deeper into the math behind it with more in-depth descriptions and hands on projects.

Hands-on is exactly the word to describe the boat races conducted by Jennifer Kline, the Principles of Technology teacher, on Tuesday, February 25 at the natatorium. Each student was challenged to create a boat that could hold two people out of nothing but cardboard and packing tape.

“The biggest thing I learned from the process was that you can never have enough tape, and the layers are very important,” junior Leah Rendon said. “Every time we thought we were done, Mrs. Kline would point out a huge hole, and we’d put like half a roll on every crack. It’s one of those things where you’re never done.”

Klein Collins has done it for years with a joined effort of all physics classes in the natatorium attached to their school. Students can use online videos of these races to draw inspiration. This was a project that was also around in the earlier years of College Park. However, it stopped a while back. After Kline started working here, she was asked to revisit the boat races, and that she did.

“I think this was a project they used to do a while ago, but because some people decided it was really labor intensive on the teacher’s part, organizing everything and getting everything ready that they stopped doing it,” Kline said. “So when I took over the Principles of Technology class, she [Ms. Hime] asked me to reinstate the boat project, and I was like, oh okay, sure.”

Students have five in-class days to plan, construct and modify their project before strapping on their life jackets and testing the boat for themselves. Students had to paddle across the pool with the goal of staying afloat the entire time. While some students were successful, some made it halfway, and, inevitably, some did not make it very far.

“The most challenging part about building the boat was deciding on the shape: what would float best and would be easy to paddle across a pool,” senior Mia Harley said. “Once we figured that out it got even more challenging trying to figure out how to attach each box in the best way possible.”

On top of being a fun experience, the boat races encourage students to employ different physics concepts when dealing with the displacement of water, distribution of mass and the overall dimensions of a successful boat.

“In a level physics class, they don’t teach math, they expect you to know how to solve the problems,” Kline said. “That’s what I do here. I show them how to do the physics concepts, but I also show the math concepts.”

Alongside the mathematical gains, students learn about teamwork. Students are allowed to pick their groups, and everyone collaborates in order to create effective designs. Two team members brave the trek across the pool while the others cheer them on from the sidelines.

“Picking who was on my team was very simple because my best friends are in the class with me,” Rendon said. “When I first moved here in November, they were the first people who welcomed me and took me into  their group.”

This year fewer students turned in their permission slips than usual. Roughly 48 students went to the natatorium when the usual number is about 65.

“I’m sure going to the boat test would have been very fun, but just being able to hang out with my friends and working with them was honestly a lot of fun in itself,” Rendon said. “I know we all had a lot of fun, especially because we wanted our boat to be better than everyone else’s.”

Principles of Technology also employ other hands-on methods of teaching with projects such as the trust bridge and the egg drop. The egg drop challenges students to build a contraption from copy paper and masking tape that will support an egg from a two-meter drop. As their final, students construct a bridge out of hot glue and file folders designed to carry five kilograms.

“The most fun part about the project was the building and laughing with friends about how we had no idea what we were doing and kind of just sticking cardboard boxes together,” Harley said. “It was a great activity for our friend group.”