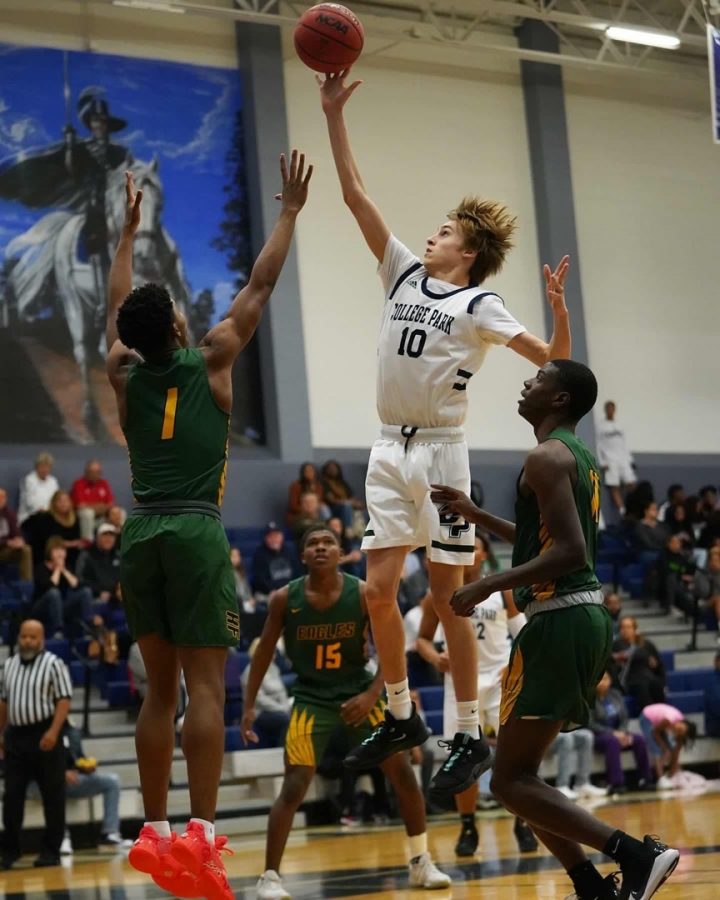 Boys’ varsity basketball is coming off a stream of wins, propelling them into the fight for a spot in the playoffs with a final  home game against The Woodlands on Feb. 18.

“What made me choose basketball is because of the speed of the game, the skill required, and the satisfaction it gives me,” sophomore Nathanial Murphy said. “Out of all the sports I’ve played like soccer, track, football, none of them is as fun as basketball to me. I’ve been playing since I was 7 and it’s something I hold very close to me.”

The season started in November with scrimmages and practices and ends in February or March depending on how far the team advances. There are five boys basketball teams including varsity, JV blue/silver, and freshman blue/silver.

“I was on varsity last year, so I got the experience needed for this year and physically grew a lot, got stronger and became a better player overall,” sophomore Ty Buckmon said. “This year compared to last year I feel like I have more of a leadership role on the team to help my team to  playoffs and possibly state.”

The team’s practices vary, typically beginning at 3 PM with a warm-up that starts with the team running up and down the court doing layups on both sides. After about 10 trips, they stretch, practice their defensive skills and/or learn anything the coach, Clifton McNeely, wants to share. After that, they prepare for games with scrimmages, practice shots or watch film from previous games.

“All of our practices are very competitive and high intensity, which I think is a big factor in our winning,”  junior Drew Calderon said.

The team itself is made up of 14 boys. All the boys have a vital role in not only offense and defense, but keeping the energy up for games that require their full attention.

“Our team really runs on our trust for each other,” junior Jack Mathias said. “We’ve never doubted each other’s ability and always believe in each other. We’re a very tight group of guys and brothers.”

The team has experienced a combination of high highs and low lows. The loss against Klein in January, and the win against The Woodlands a week later have served as landmark learning experiences for the team.

“This season is vastly different than last season, the biggest thing is being at the top of the district standings,” Calderon said. “Last year we were a middle of the pack team. Being on top, every team wants to give us their best game, and we always have to be on our A-game.”