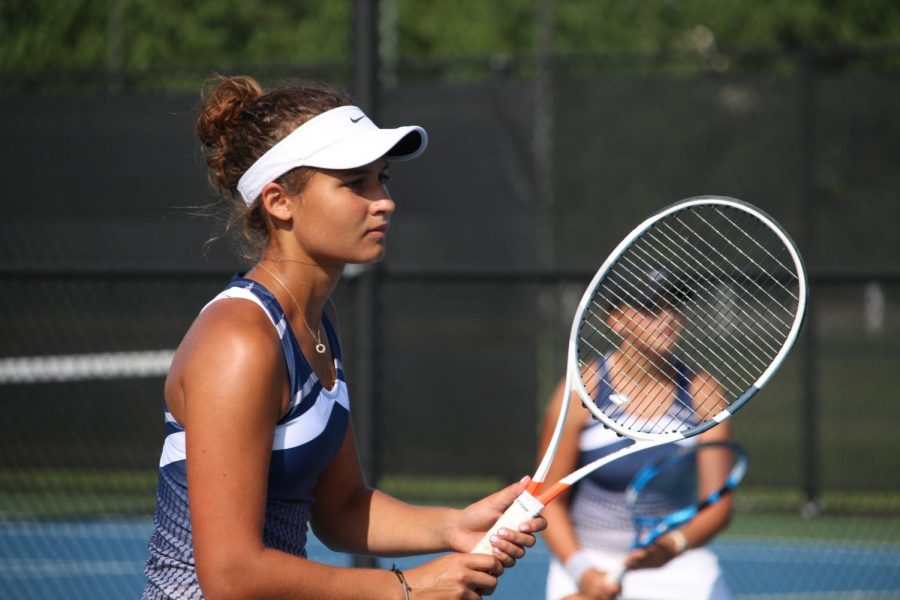 Senior Olivia Behne prepares for the next point to begin.

After many long after-school practices, intense workouts, and away matches, tennis season has come to an end. The team finished with a 10-4 overall record and placed 3rd in the district after losing to Klein 9-10 on October 8th.

“We advanced to the playoffs this season and won against Aldine Davis 15-0 in the bi-district, and then lost to the #1 ranked school in Texas, Austin Westwood, 0-10 in the second round,” Head Coach Robert Klein said.

The team will now begin their offseason training to prepare for their spring tournament season that begins in January. They will lift weights, practice individual skills they need to improve on, and condition daily. This year, the varsity tennis team is led by senior girls- Alden Allen, Olivia Behne, Mina Ghayour, and Swathi Mannem, and senior boys- Ronin Burke, Andrew He, and Hunter Hippenstiel.

“This is a very good group of young men and women who represent College Park very well on and off the court,” Coach Klein said.

Along with being successful on the court, many varsity tennis players are receiving prestigious academic achievements as well. This year, there were 6 tennis players who qualified as National Merit Semifinalists. This is a huge accomplishment for the tennis program. For the next 3 months, the team is ready to focus on their academics and to train hard for their upcoming spring tournaments.