“Know your own happiness." Jane Austen 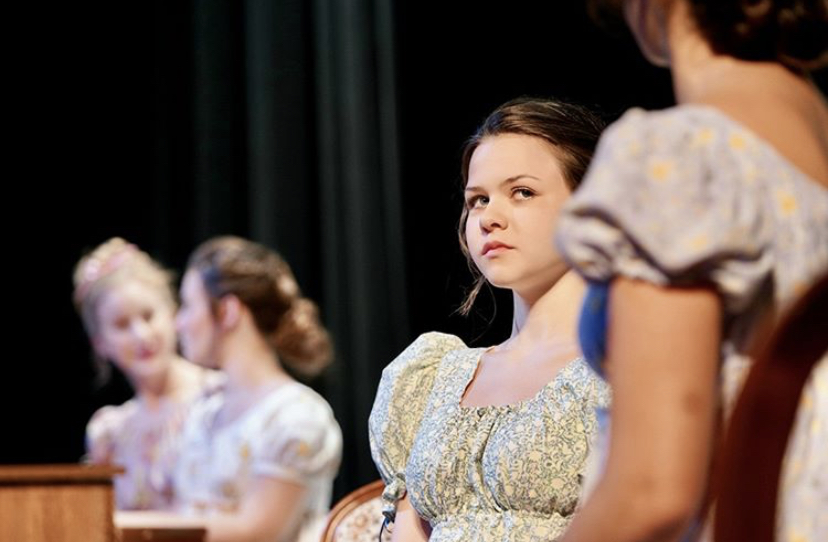 Intricate hairstyles are carefully crafted and dresses modeled after Empress Joséphine are tied with delicacy as each actor elevates their English and pushes their shoulders back to embody the characters in Jane Austen’s beloved Sense and Sensibility.

Sense and Sensibility takes the stage in the auditorium for the fall mainstage on October 23rd to October 26th at 7 pm for all audiences. Tickets will be $10 at the door.

Sense and Sensibility follows the life of The Dashwoods after the death of their father. Elinor, played by senior Miranda Marquez, and Marianne, played by junior Jillian Parks, navigate the tricky waters of societal status, love, gossip, heartbreak and vulnerability. The original book was set in the 1790s, but the play was recently rewritten in 2018. The play had touches of modern comedy and conventions while staying true to the elevated English and setting of the time.

“The most challenging part of the play is the pacing,” junior Morgan Bell said. “The play was adapted from the book and is quite different in that it is very fast and fun at many times, while the book can be sort of melancholy. The actors and run crew have worked very hard to make sure that the transitions run smoothly.”

This show is a high energy, fast-paced comedy shown through both the characters and the bizarre situations. From an intrusive gaggle of gossiping women to a condescending, brutally insulting Lucy Steele, played by sophomore Delaney O’Neill, to a bumbling “good guy” who cannot seem to express his feelings, this show has a character for everyone.

“I love my role,” O’Neill said. “Lucy is very manipulative and knows exactly what she wants and how to acquire it. Also, she always knows how to get under people’s skin in order to raise herself up in the social hierarchy.”

Along with comedy, Sense and Sensibility tackles many important themes such as the balance between being too sensitive and being too reserved, the dangers of spreading “the news,” and the destructive nature of lies in a relationship. Every audience member can find a piece of themselves in each of the characters.

“In the play, there are characters called the gossips that watch all of the other characters, always spreading rumors that tend to be problematic,” Marquez said. “I feel like the theme that we see in our own society is the social norms and gossip that surrounds everyone today. The audience can relate as we often have everyone watching and judging our every move, with social media today as it is.”

The rehearsal process lasted from September 3rd-October 22nd after school from 2:45-5:00 pm. The cast began by reading through the script then jumped into blocking and memorizing lines. Each scene was rehearsed one by one until the cast was able to do run-throughs for each of the two acts. From there, the script was divided into chunks and rehearsed until technical rehearsals came around.

“The most enjoyable part of the process for me has been meeting people and getting closer with them,” junior Nico Hamburger said. “We’ve made secret handshakes and inside jokes, and the social aspect of theatre has always been an incredibly valuable one to me. Working with new people and getting their feedback is important to me, and this show has provided it more than any other production I’ve been in.”

“I’ve been doing costumes for Sense and Sensibility,” Nottingham said. “I actually made one of the dresses from scratch, which was an experience all in itself. It took over 20 hours of work and a lot of patience. I feel I have a deeper appreciation for all the work that goes into a piece of historical clothing and am so happy I got to recreate something that was once so popular.”

The cast, crew and directing team has worked for months on this show to bring to life the work of Jane Austen. Each character has their own stories and quirks that allow for a diverse and emotional storyline.