Playing All The Way To State 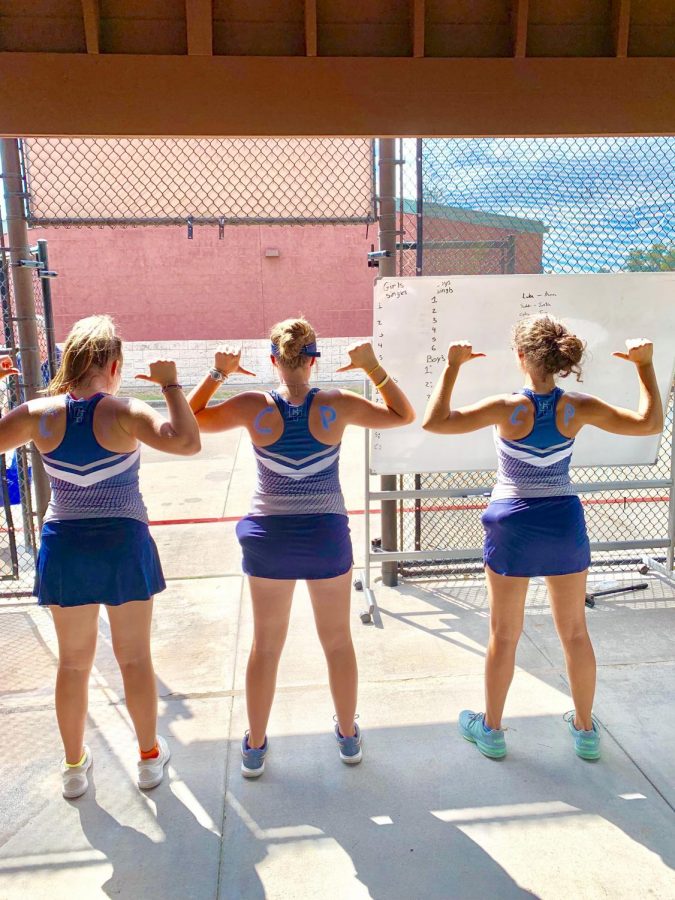 The girls stand in a ready stance as tennis season begins.

The wack from the racket, the bouncing of tennis balls, and the hours spent each week preparing in the hot summer Texas heat so that the team can advance to state. Excluding last year, the girl’s tennis team has made it to states for the past two years and this year they are determined more than ever to make it to states.

This year, the girls have a strong team since only one senior graduated last year. Since the team is relatively the same, the players know how one another plays which allows more room for growth.

“Every year we qualify for district because it’s the top two teams in each district,” senior Team Captain Alden Allen said. “Generally, it’s The Woodlands and then us. We’re hoping that we’ll make it to State, but the only thing we’re certain about is qualifying for districts.”

Preparing for State holds the supreme goal of the team. All the practices both at school and away are dedicated to sharpening their skills and working their way to the top to be the best of the best.

“We prepare by doing warm-up exercises and sometimes running,” freshman Kathryn Collins said. “Some of the exercises include hamstring and calf stretches, shoulder stretches, and neck stretches.”

Apart from getting their body into shape, the girls partake in many tournaments to put their practice to the test and essentially gain better insight on how to improve.

Before game day, the girls get themselves ready by eating right because what goes into their bodies affects the ability at which they play.

“It’s so hot in Texas and playing on the concrete, it’s generally 5-10 degrees hotter, so we make sure we’re drinking a lot of water and Gatorade before we play,” Allen said. “Eating right and drinking lots of fluids is a huge part of it. Before matches, my partner and I usually listen to music together, there’s not a whole lot of talking because we are just trying to get our head in the game.”

Having a great connection with their coach creates a huge impact on why the tennis team performs so well.

“I’m personally most inspired by my old coach Nico Pinones because he taught me that believing in myself can make a huge difference,” Collins said.

For Allen, the current girl’s tennis coach, Coach Klein, is her biggest role model and one of the reasons why she has continued to play varsity tennis throughout her four years of high school.

“He’s really good at adapting to each player’s needs and abilities,” Allen said. “We rely on each other a lot and he’s almost like a father figure to me in a way. I wanted to quit after freshmen year because I had torn my rotator cuff and I got into this slump where I was too lazy to try to get back into tennis and I thought I wasn’t good enough. But I had a lot of conversations with him and he’s the one that kept my head in the game, and I can honestly say that he’s the reason that I am still apart of the tennis program.”

On the surface level, tennis seems fairly easy, but the depth and hard work that each player puts into this sport are beyond the nature of simple.

“A lot of people don’t really give tennis any credit, but it’s actually a lot harder than people think it is,” Allen said. “It’s funny because tennis is such an easy concept, just make contact with the ball and hit it over the net, I don’t know why it’s so complicated, but it is.”