It was a homecoming game to remember for College Park students. The student section was electric, packed all the way to the top of the stands with excited fans. The Cavs entered the game looking to improve their record 2-1 and win back to back after starting the season with a loss.

The game was never close after the opening kickoff. The Cavs had a long touchdown run by Ty Buckmon called back because of a holding. But after that there was no looking back.  The scoring opened with a 40 yard touchdown pass from senior quarterback Ty Buckmon to senior tight end Cody Mladenkaa who mossed the corner and then ran it in himself.

“It sucked because we called a qb sneak for the first and I happened to break it long, and you don’t usually break those for that long. So it was cool but getting called back was devastating,” said Buckmon.

Then, sophomore gadget player Connor Dunphy took a hand off 55 yards down the right sideline to make the score 12-0. The steam rolling continued as Cy Lakes fumbled a snap that was recovered by a Cavalier defender.

This led to another touchdown connection from Buckmon to Mladenka to make the score 24-0. Later in the second quarter, Ty Buckmon scrambled out of the pocket and delivered a nice throw on the run to Alex Brigman for another varsity touchdown making the score 30-0. Before the end of the half the score was 42-0.

“It was the first time I’ve scored twice in the same game in my high school career, so obviously that was awesome but the win still felt better” said Cody

The end of the first half was capped by an amazing diving catch by senior receiver Holden Rook who laid all the way out to secure a. huge gain.

Senior safety Gavin Morgan said “It felt good to allow players to play during the second half who don’t normally play because it was a good reminder to everybody on the team that we all prepare every week for a reason.”

The Cavaliers starters only played during the first half before they were taken out for the backups.

Standout players included starting quarterback Ty Buckmon who had a long run called back at the beginning of the game, senior Holden Rook and his amazing diving catch, and defensive back Laterian Miller who recently made the transition from receiver.

“It felt good we just went out there and had fun playing our game. It boosted our confidence for sure, but the real test is this week” Miller said oo their performance.

Their next game is this Saturday, Sept. 18th, 6 pm at Woodforest Stadium against Klein High School. 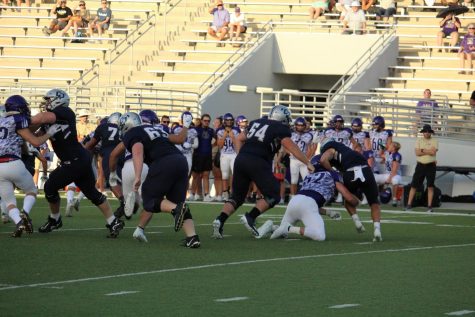