Girl’s Soccer Recap and Looking Ahead 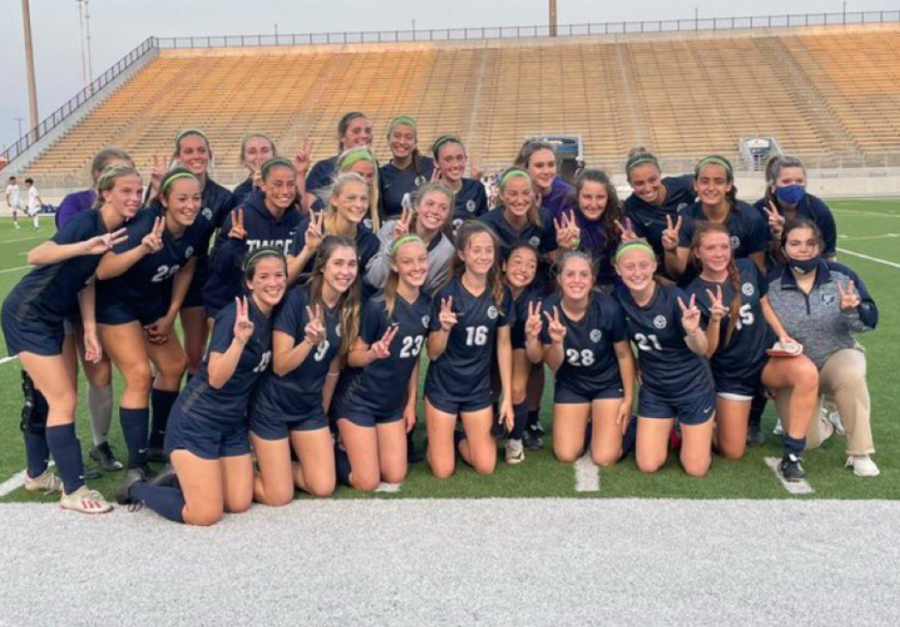 The exciting sights of girls sprinting down the field, the clicking of cleats, and the eruptive cheers from friends and family has officially come to an end this year for the Lady Cavaliers. The girl’s soccer team’s successful season concluded in late March.

The varsity team finished the year with a 14-5-3 record. They placed 2nd in the district behind The Woodlands and had a 8-2 district record. Last year they placed 6th in the district standings. For the 1st time since 2017, the team advanced to the UIL playoffs. They were able to compete in 2 rounds until they were defeated by Klein Cain on March 30th.

“Competing in the playoffs was like a dream come true,” junior Mia George said. “We miss so many things to be at practices or games but getting to the playoffs makes it worth it. It felt amazing to be rewarded for all that hard work, but sadly it was cut short this year in penalty kicks against Klein Cain.”

A devastating chain of events during the game caused the team to lose against Klein Cain even though the score was 1-1. Despite the conclusion of the season, the girls were able to enjoy a full season of memories and growth. After not being able to finish their season last spring, the team began training sessions early in the summer to get an edge on other teams and improve their skills.

“My favorite event this season was our last home game against The Woodlands. We lost 2-0 but it was a huge improvement from the first time we played them this season,” junior Simran Gupta said.

This year, the varsity team will be losing 11 players who are graduating. This includes three Lady Cavaliers who signed their letters of intent to play competitive soccer in college. Sara Engels will be attending Mercer University, Mia Summers will be at Southwestern University, and Faith Autery will attend the University of Texas at Dallas. Although many varsity players will be missed, a full roster of juniors and sophomores from both the varsity and junior varsity teams provide hope for the future seasons.

“The JV Navy team had a great season this year- we were blessed to have a roster that was filled top to bottom with eager, promising players,” JV coach Riley Reese said. “The district we are in this year has some very strong opponents, so there were a few games where the girls had to challenge themselves to play with speed and heart from the first minute to the last.”

Although next season will look much different for the Lady Cavalier team as many veteran players will be missing, the talented and dedicated JV players will help fill the void. The girls will now begin their offseason and preparation this month for the 2022 season as they look to finish what they started in the playoffs this year.

“I know we’ll all dig deeper and work harder in order to get further next year and carry on the seniors’ legacy,” Mia George said.