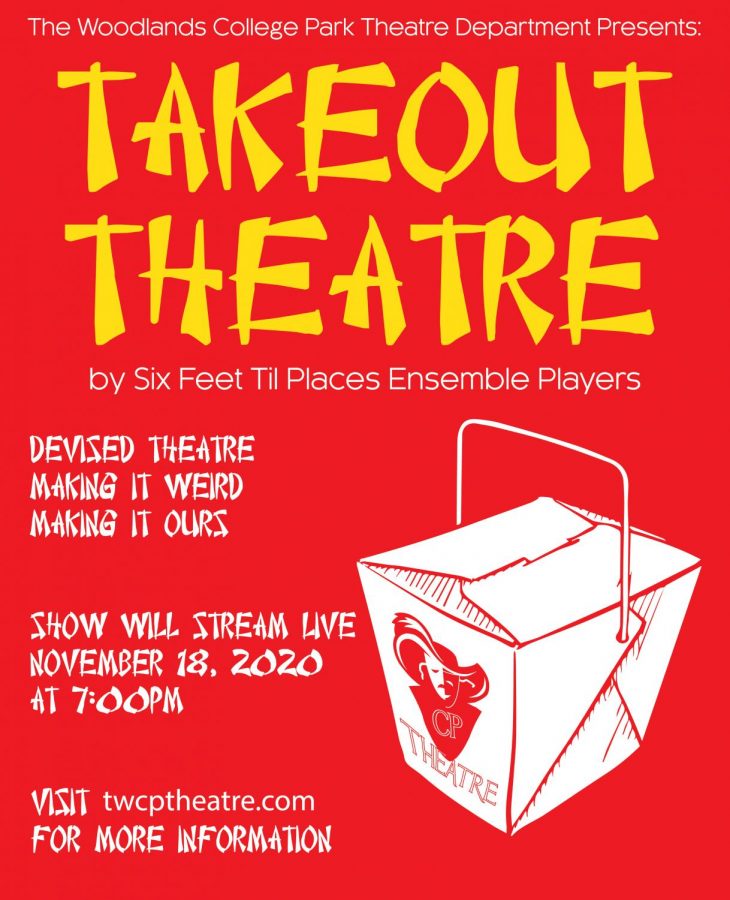 The auditorium seats have been empty in terms of theatre-goers since the theatre department performed Second Samuel back in March. However, with the imposed space between us and the safety risks of growing cases, thespians have still been able to creatively exercise their right to perform with scenes and monologues being shared via streaming.

Kara Zellar, theatre teacher, took these unprecedented times to create an experiential theatre piece called Takeout Theatre. With each audience member picking up a takeout box filled with six items and a blindfold, the actors perform the show in the auditorium to a virtual audience at home.

“In a time of isolation, disconnection, and uncertainty the goal of Takeout Theatre was to bring about a shared experience,” Zellar said.  “It’s an exciting experiment that, no matter where you are, is one hundred percent a live event where we will all be doing the same thing at the exact same time.  In this season of innovation, introspection, revolution and reckoning what better time to realize that we can, and we will, make a new theatrical experience.  And we hope we inspire conversation and action amongst you (our audience) to try something or make something new, too.”

The Six Feet Til’ Places Ensemble is made up of six players: seniors Gabriel Poole and Ashley Wienecke, sophomore Lillian Wingate, and freshmen Grace Udoh, Jackson Bienek, and Kinsley Succow. On top of being actors, everyone in the ensemble is also a playwright.

“The most rewarding part has been the amount of work we put it,” Wienecke said. “Not only as actors, but playwrights. We devised this piece with very little knowledge of what we wanted to do. I’d say creating something from scratch is something to be proud of.”

A prevalent theme of this show is the idea of staying connected. With the theatre itself connecting tens of thousands of patrons every year, the shut-down of Broadway and many subsequent for-profit and non-for profit local theatre has been devastating to that portion of the population.

“This time has impacted us all differently, but my greatest takeaway has been the importance of art,” Wienecke said. “When we feel upset or weak, we turn to the light. For many, art and entertainment is a way to escape the real world. As an ensemble we wanted to provide this light for you. A moment of connection and joy.”

The process was very idea-driven. Individual perspectives were crucial to devising and rehearsing this piece that was not only new to College Park but to the theatre world in general.  The process began with script-reading to determine the kind of characters that each cast member was going to play. Rehearsal started over zoom and gradually transitioned into face to face rehearsals after school. They rehearsed in groups of two three days and all together one day, leaving Tuesday as an off-day.

“The most challenging part of this show has been developing it to make sure that everyone is having an interactive, unique and hands-on experience,” Udoh said. “It has also been challenging to create this show to symbolize the different aspects of this unprecedented time.”

The cast also worked with a professional from the Alley Theatre in order to work on techniques and tricks to refine the actor’s most valuable tool- their voice. Being able to manipulate volume, accents, and pitch of an actor’s voice can be crucial for differentiating characters, ages, and backgrounds from that of the actor. He also aided the actors in creating characters and the quality of their overall show.

“The most challenging part for me has been working with my voice to open it up and to use it correctly,”  Poole said. “You’re not supposed to really use your throat to create different voices and the coach would guide us through how to mainly use our stomachs to project the majority of the sound. This is my first show ever and it was something I wanted to do not really knowing my own abilities going into it. Seeing things workout has been really rewarding.”

The show will be streaming on November 18th at 7 pm to those who registered for a free ticket. Actors have been collaborating with the school’s technical theatre department while they set up the auditorium for their performance, and the broadcasting team as they prepare to stream that performance.

“The most rewarding part was collaborating with our technical theatre department, under the direction of Christopher Beineman, and our film and television department, under the direction of Kacie Windham,” Zellar said. “This has been a grand experiment in a new format and has helped us stretch new creative muscles.  Our hope is that you have as much fun live streaming and playing alongside with the ensemble as we have had producing, directing, and rehearsing it for you.”