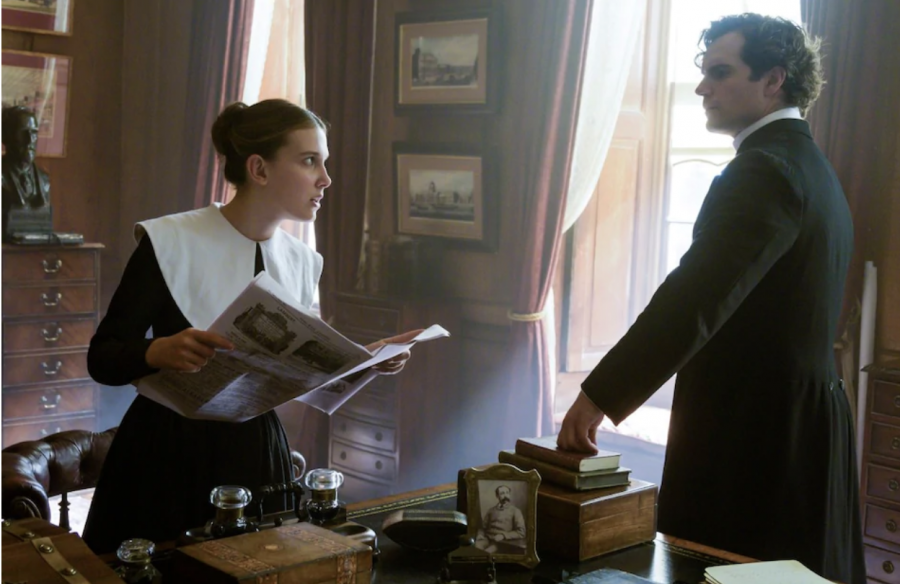 Based on the young adult mystery series by Nancy Springer, Enola Holmes (2020) is a mystery film following the teenage sister of Sherlock Holmes as she journeys through London in search of her missing mother. The film was directed by Harry Bradbeer and stars Millie Bobby Brown (Stranger Things) as Enola Holmes and Henry Cavill (Man of Steel) as detective Sherlock Holmes. It released on Netflix on September 23, 2020.

Although formulaic, Enola Holmes has a stellar cast and strong visuals. Both Millie Bobby Brown and Henry Cavill prove once again their talent and capacity for bringing life to their characters. Louis Partridge, who plays Enola’s love interest, also gives a great performance, being the funniest and lightest character in the film.

As fun and captivating as it may be, the film suffers from its lengthy runtime and inconsistency in the story, not to mention the obnoxious and cringeworthy fourth wall breaks. The movie runs for over two hours, half of which could be easily removed without impacting the story. Halfway through the film, it seems as if Enola completely forgets about her missing mother and instead becomes obsessed with her love interest’s case. The original mystery and premise of the movie is not acknowledged until the very end, and the resolution fails to satisfy or give closure.

The film is at its best when Brown is on-screen. Raised by her mother and isolated from the rest of the world, Enola must learn how to survive in the crowded streets of London as she searches for her mother. Since the film is set in the late 19th century, Enola is often the victim of society and its norms on women. Her oldest brother, Mycroft Holmes, played by Sam Claflin (The Hunger Games Trilogy) believes Enola must be educated and tries to send her to a boarding school for teenage girls. With strong feminist themes, Millie Bobby Brown sets yet another example for young women everywhere.

Despite a few problems with the story here and there, Enola Holmes is a great film to watch, if only for Millie Bobby Brown and Henry Cavill. It is a film full of heart, fun, and spirit, as well as great mysteries and thrills, and is a stellar on-screen introduction to the younger sister of the world’s greatest detective.